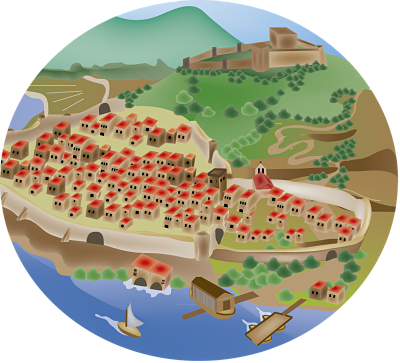 In the beginning of the 14th century, after the Order of the Temple abolition (1312), Ascó became a hospitaller encomienda under the Amposta castellany. The hospitaller encomienda of Ascó, according to Pere el Cerimonios’ census in the second half of the 14th century, comprised the following municipalities: Berrús, Riba-roja, Ascó, les Camposines, la Fatarella, Vilalba, Vinebre and la Torre de l’Espanyol.

Ascó’s encomendero owned a house in the village, still preserved in the second half of the 19th century, that received the name Casa del Encomendador. The encomendero was in charge of the population’s government and took part in the war against Joan II. To the castle of Ascó came, from Aitona, the prince of Viana Carles d’Aragó and from there, he was moved to Zaragoza, prior to the time of the war mentioned. During that war, the archbishop of Zaragoza’s forces, the order of Saint John, took over Ascó in 1466.

THE INNER AND OUTER UNIVERSITIES

THE MOOR EXPULSION AND THE DISSAPEARANCE OF THE TREASURES

According to Henri Lapeyre, in Geographie de l’Espagne Morisque, Ascó was one of the villages in the Catalan Ebro with a higher Moor population. The consequences of the Moors expulsion from Ascó (35% of the population) were so ill-fated that in 1615 the village counselors wrote: “… the village remains today deserted, without universities, its houses ruined and destroyed, and the fields and vineyards and olive trees and mulberries devoid of people that cultivate them, headed to the same ruin and destruction, greatly diminishing the yields of the encomienda”.

The mistaken royal decision brought not only misery and desolation to the fertile riverside lands of the two greatest rivers in Catalonia, but filled the hearts of all the Catalans that witnessed the expulsion of such a fair people with grief and sadness.

GETTING INTO THE MOORISH PAST OF ASCÓ

With the consolidation of Christianity, Ascó slowly recovered its economic, social and cultural activity. The leading figure of the encomendador appeared, the person who ruled over Ascó, and the first manor house associated to a noble title in Ascó, Cal Cavaller. The village split in two, the Christian area and the Moor area, both with internal and external connections through the gates.