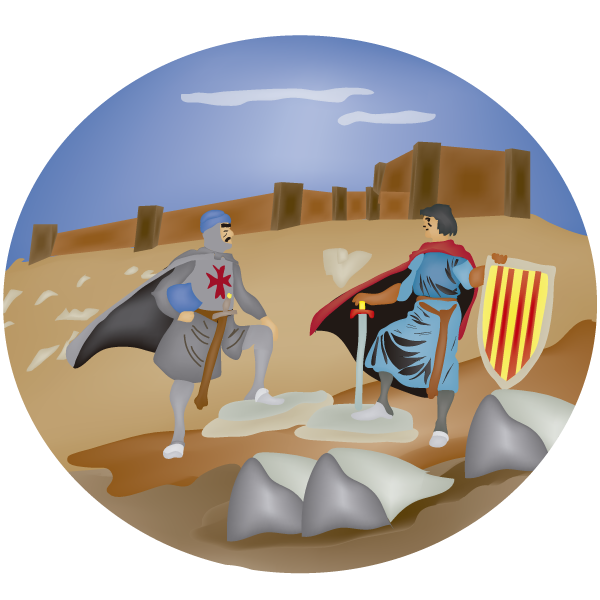 In 1153 the Count Ramon Berenguer IV gave the Templars properties in Ascó. In 1175, Alfons I ceded them the Ascó castle. In 1182, the monarch gave the Templars that castle, though it kept some of its rights and, finally in 1210, Pere I gave all the rights he held to Ascó and Riba-roja. This meant the Templars obtained full seigniory.

At the end of the military reconquest of the area comprised between Lleida and Tortosa, there was a big Saracen population, deep-rooted from old and essentially devoted to the culture of the land. It is believed that the Christian forces suggested the expulsion of the Saracens, but facing a lack of human people to proceed with the repopulation and to prevent a depopulation harmful to the economy of the Segre and the Ebro riverbanks, Berenguer IV chose to secure the continued presence of that population by offering them direct protection and by granting the preservation of their language, culture, religion and their legal and political organization.

Ascó Muslims kept living in la moreria, surrounded by walls as the recently arrived Christian population built their houses outside, separating thus the Moorish and the Christian areas.

THE TEMPLAR TREASURE IN ASCÓ

The images in ten big drawings conserved on the prison wall of the Chinon castle, in the French valley of the Loire River, photographed and analysed by Pros, allow us to document that the treasure of the Temple was buried around the Encomienda of Ascó in 1306. The treasure had been saved in Cyprus in two ships that passed through Turtusa in Syria, arrived to the Catalan Tortosa, from where, during 14 years (form 1292 to 1306) the precious and mysterious coffers were carried up in llaüts.

GETTING INTO THE TEMPLAR PAST OF ASCÓ

With the arrival of the Templars to the village, Ascó transformed and grew. The newly arrived Christians built houses outside the walls while, little by little, a Christian area appeared next to the Saracen one that constituted a new closed village. The Templars turned the Saracen castle into a defensive and religious fortress, a Christian church was built and in the river, the commercial activity never ceased. Ascó, along with Tortosa, controlled the fluvial and terrestrial commerce in the Ebro.

The cohabitation among cultures deteriorated until the Moors were expelled from the Iberian Peninsula. A period of decadence began, when most of the treasures forged in Ascó became endangered. There was a population loss, the agricultural production dropped and the fluvial commerce diminished.