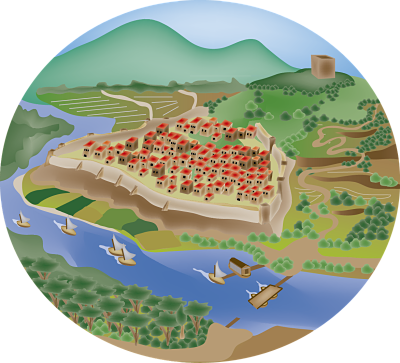 In the 8th century, the Visigoths occupied all of the Iberian Peninsula under a sole kingdom with its capital in Toledo. They took advantage of the roman organisation and institutions and adopted plenty of their customs and traditions. In Ascó, they probably settled at the top of the castle terrace, using the existent Iberian-Roman settlement.

Around the year 714, with a large section of the Peninsula under Saracen control, the Muslims, commanded by the caudillos Musa and Tàric, descended down the Ebro valley. They passed by Zaragoza, Huesca, Lérida and Tarragona to the Ribera d’Ebre and Tortosa. Since then, the village was known as Hisn – Adkun, a place name that led to the present Ascó.

In Ascó and in the whole Ribera d’Ebre there is a saying “the Moor Mussa is coming…” to scare the children. In the Priorat region it is traditionally explained that the moors travelled along the Ebro through el Pas d’Ascó or el Pas de l’Ase.

ASCÓ, A COMMERCIAL, AGRICULTURAL AND MILITARY CENTRE IN THE CATALAN EBRO

During the Muslim period, Ascó became a big commercial, agricultural and military centre in the Catalan Ebro thanks to its strategic location. Ascó ruled over a vast territory and had a castle, a mosque, an aljama, Arabic baths, a hospital, a mass grave, a market, some silos, an oil mill, a space for horse racing, a dovecote, a barge and a fluvial flour mill.

The village was presided over by the castle and surrounded by walls formed by the exterior faces of the outer village buildings. The walls were connected by gates, some of them flanked by defence towers. The activity around the village was really important, with llaüts navigating the Ebro, muleteers waiting to cross the river by barge, farmers working the fields or the potters on the river bank. The Muslims developed the building of fluvial vessels and it is believed that they perfected fluvial transportation with the llaüts and the barge and also the irrigation systems.

THE RURAL DISTRICT OF ASCÓ

The Ascó castle answered to the Wali of Siurana and constituted a vast rural district that reached Margalef, on the northern slope of the Montsant. The hisn (castle) of Ascó (Adkúm) led up to a small rural district (juz’, iglím) made of several hamlets bound to the Wali (Vinebre (Ibn Ábir), Torre de l’Espanyol (Turris d’Alboçalaz), Palma d’Ebre, la Bisbal, Cabacés, Margalef). The hamlets from la Bisbal (Mon Sacer) and Margalef (marg Haläf) where ruled by a representative of the caudillo in Ascó, who resided in Amilkarbesir – Avincabassaer, the present Cabacés. The rural district in Ascó was bound to the Wali and later on to the taifa of Siurana and was delimited as an area within an even larger one commanded by the city-territory of Tortosa. The fortifications of Miravet, Móra d’Ebre, Garcia, Ascó and Flix had direct visual communication between them and possibly with the Wali of Siurana by means of the Asco district.

GETTING INTO THE SARACEN PAST OF ASCÓ

Walking in Ascó means traveling to a Moorish past thanks to the aspect of its old town, which still preserves the urban Andalusian outline. The Moreria of Ascó stands out for its size and architectural importance. The darkness of the streets, the houses narrowing with height, the baixungues (the descents, sloping streets) narrow and pitched, houses with walls and porches will surprise you in every corner and make the visitor travel in time.

The Andalusian occupation of Ascó left behind a very rich legacy that can still be discovered by strolling down the streets or by means of local culture and traditions.